Navigation Menu+
Eyes Full Of Dreams is a musical and motivational masterclass about making use of everything you are. This concert documentary was written, produced and scored by Scott Ginsberg. 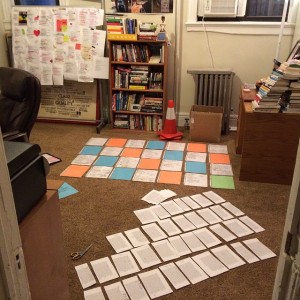 What was the moment of conception for this film?
My wife recently started her own business, and so I began writing songs as a form of encouragement and inspiration for her journey. After a year of composing the music and writing a series of motivational essays, I realized that I both an organizing principle for something interesting. Not just an album, but also a movie and a book. The project took off from there.

This is a concert documentary about dreams. How is the project itself a dream?
Everyone has projects they want to realize in the world. Meaning, everyone is looking for tools to help streamline effort, reduce time, save cost and most importantly, maximize satisfaction. And that’s when the idea of a clearinghouse comes in handy. It’s not a physical institution that distributes something, it’s a conceptual destination where you can unite all of your interesting goals, intermingling your dreams into a meaningful, cohesive whole. When I started making this film, I treated it as clearinghouse project. Because the movie was a confluence of many dreams. A platform that allowed me to find a home for all of my talents. A productive obsession that freed me flex each my artistic muscles, from writing to singing to guitar playing to public speaking to book packaging to mass communicating. It’s a movie about dreams, but it’s also confluence of many smaller dreams of my own.

What resistance did you encounter during the creative process?
This movie broke thematic ground for me. It contained a completely different tone and message and posture and purpose. Much more educational. A musical slash motivational master class on how to follow your dreams. And that’s what worried me. Because I’m not a teacher by nature. Who am I to tackle that subject? Where do I get the audacity to educate people how to dream? That’s not my thing. That’s not what my audience knows me for. And so, I was fighting to silence my inner saboteur that was keeping me from taking risks

What was the collaboration process like?
Working with videographers, engineers and my art designer and director was a challenge. That’s the scariest and most vulnerable component of collaboration. Sharing agency. Giving up your dream to merge it with somebody else’s vision. Because unlike the first movie I made, there wasn’t a big, sweeping aesthetic vision for the project. This time, I wanted to go into the filmmaking experience having no idea what the finished product would look like. I wanted to allow the work to unfold according to its own pace. That way, we could act in the service of whatever was emerging. It was an intimidating process. Especially for a stubborn individualist control freak like me. I’m not exactly what you would call a team player. But what I started to learn was, if you collaborate with smart, creative people that you trust, giving up control isn’t as scary as it seems. In fact, it’s quite liberating. Because you know those people are going to deliver. You know they’re going to add dimensions and perspectives and ideas that ultimately make the work better. That’s what happens when you hire the right people. It’s the human equivalent to measuring twice, cutting once. If you do it right the first time, everything else takes care of itself.

What are you trying to do with this movie?
I was having lunch with a colleague recently when the topic of return on investment came up. She asked about this film, and how I would know whether or not it was successful. And I told her, that’s not the point. The fact that I did it means it’s successful. The fact that it exists in the world forever is my return on investment. There’s no board of directions to whom I need to justify the value of my art. Contrary to corporate conditioning, when it’s your heart, you don’t have to convince people that you can’t live without it. My wife loves the film, and that’s enough for me. Although I will happily accept millions of dollars from a faceless corporation, if that opportunity should present itself.